The Sea Cleaners, a NGO, has been created in 2016 by the Franco-Swiss navigator and explorer Yvan Bourgnon.

He has been traveling the oceans since the age of 8 with his parents for 4 years, and then competitions arrived. In 2015, while he was in the Bay of Gascogne, he was forced to abandon his sailboat The Transat Jacques Vabre where his boat struck by unidentified objects. In the same year, he navigated around the world and was shocked by the increase of pollution floating in the oceans.

And at the same time, seeing the natural world becoming a place of trash with many different wastes such as plastic, when he returned to France, Yvan Bourgnon decided to undertake a huge project: The Sea Cleaners and The Manta Project.

Through this project, he wants to take action by combating plastic pollution at sea and on land.

The Association The Sea Cleaners will use a large boat The Manta that will be able to collect floating macro and micro plastics by crossing the oceans nonstop in order to be rapidly everywhere in the world and efficient also on costal areas that are the most polluted places.

It will be the first sea-cleaning boat collecting plastic waste in the oceans on an industrial scale.

Where will The Manta boat intervene?

The main places where The Manta’s boat will intervene are in Asia, Africa, and South America where there is an important plastic pollution due to the most polluted rivers found in these areas.

Indeed, rivers, mouths, estuaries, large rivers, and coastal areas are the places where there is a large concentration of plastic waste. In fact, the pollution in the oceans coming essentially from rivers with 0,41 to 4 millions tons of pollution found, but natural disasters (hurricanes, tsunamis) are also part of the pollution of the oceans.

To organise their intervention, areas will be targeted thanks to satellite images coming from collaborative partners, and through exploratory missions done by the association The SeaCleaners.

What are the most plastic-polluted rivers?

For having an optimised sailboat, in 2018, research and development taken in place with a huge team of engineers, technicians, and researchers working together to better build The Manta sailboat.

In this research and development, many aspects has been taken into account such as reducing energy costs, ability to traverse anywhere and collecting plastic pollution efficiency at the same time, integration of new collection methods, and educational, scientific and demonstration aspects, and finally developing an energy recovery unit for plastic waste.

The sailboat’s design has been thought very carefully for having the best material in term of recyclability, durability and viability for the lowest carbon to produce, and also for collecting plastic very efficient in order to have the lowest carbon footprint to produce.

For this , its size has been reduced in the idea of reducing also its mass and limit the amount of raw materials used in the construction of hull and superstructure.

How Manta’s sailboat will work?

Thanks to a propulsion done by the sails and rigs to minimise its energy consumption, the sailboat will work with an important level of energy autonomy. Indeed, the sailboat will function with 75% of its time without fossil fuels.

On board, the electricity will be supplied by renewable resources with the goal of increasing self-sufficiency with a minimal environmental impact and reduce consumption of fossil fuels.

It has been important to choose an ecofriendly technology and this is the pyrolysis system that has been chosen for processing and recovering plastic waste with very low external emissions. This system will capture toxic emissions such as CO2 released by this process and will be treated minimising air pollution. Indeed, the pyrolysis process will convert plastic into usable energy powering all the electrical equipment on board thanks to waste-to-electricity conversion unit (WECU) with whom there will be a reduction of environmental impact of plastic collected by 22%.

This filtration system conforms to the strictest standard of the European regulatory requirements.

For other waste collected such as metal, glass, or aluminium, they will be put in a recycling local waste whereas organic waste such as wood, algae will return to the water.

The solid carbon residues will be stored and distributed on land to produce products, such as bitumen, cement, and fuel. 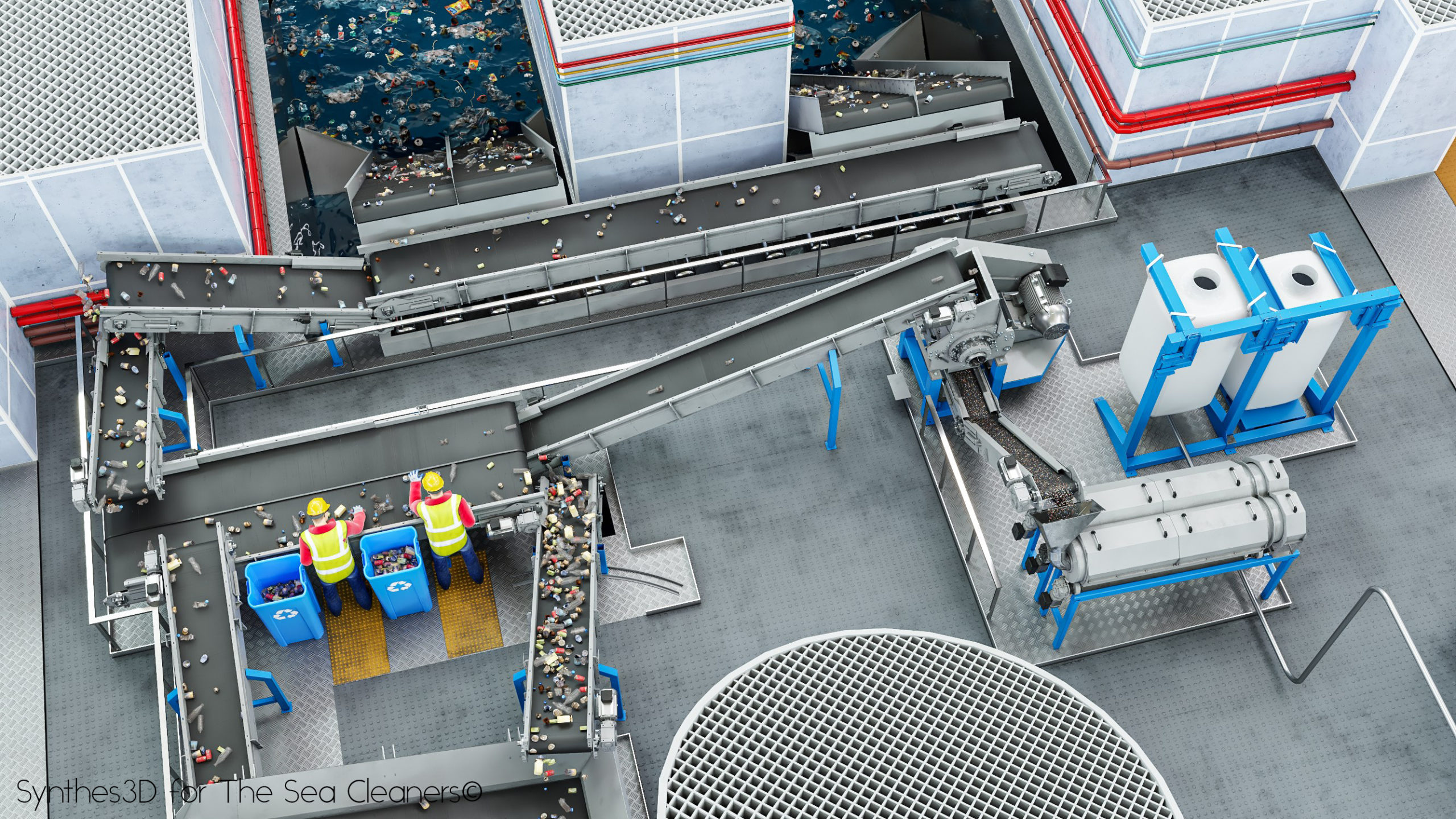 A little bit about plastic

Plastic is a huge issue well-known by the all international community for years. Since its introduction in the 50s, plastic changed life of people over the world with the emergence of thousand of daily objects.

This is clear that the invention of plastic changed the world when it has been created because thanks to this polymer, many different daily objects arrived in our life such as computers, televisions, kitchen utensils, plastic bags, cars, planes, phones, clothes, and many more to whom plastic is needed to their production.

Thanks to plastic, the world completely changed its consumption habits, but issues appeared with lots of damages for wildlife and also for humans being, but this problem started to become a big one after seeing the real damages that occur nature and wildlife.

Even if plastic is useful in our daily life, this is not an eco-responsible product at all. It caused injuries and death for many animals around the world, both underwater and on land.

Having seeing the impact of plastic all over the world and especially in the natural life, it should have been time for years to find a solution against it.

Plastics released CO2, methane, and other greenhouse gas during all their cycle life stages from the extraction to fuel refining until elimination, incineration and release waste in the environment.

Humans being must not forget that they ingest or inhale around 11’000 plastic micro-particules each year through food, water and breathing with an impact on our health. All the world is surrounded by plastic.

For all those main reasons, The Manta project has been created.

What is happening in the oceans?

Each year, 1,5 million of animals die including 100’000 marine animals according to the UNESCO, 14’000 species are impacted by plastic pollution.

Humans being throw three times more garbage in the ocean than fishing.

The Manta Project is going well in the project of removing plastic in the oceans. In fact, oceans are the main place where the most of plastic are released from rivers and stay in the oceans and caused ecological disaster for underwater wildlife and others species who feed in the oceans.

The Manta Project came from, the NGO The Sea Cleaners created by the franco-swiss navigator and explorer, Yvan Bourgnon, in 2016. With this project, the idea is to collect the ocean’s waste in costal areas where there are the most pollution.

The Manta Project will be released in 2024 for it first mission.